In November last year, I thought it was  ‘Time to Book Profit‘, however, the market continued to climb over the next few months. However, now it does look like the bull markets the world over  aging. 2015 has already seen a roller coaster ride. I have been busy reading and digesting the many 2015 outlooks that come across my desk. I have distilled all that information into a workable thesis that allows you to generate attractive risk-adjusted returns in this maturing market cycle.

I am well aware that forecasts are always fraught with risk, but I also realize that in order to look forward, we have to make certain assumptions.

One of the first things to recognize is that the current bull market is approaching almost six years in age. While no one knows precisely how long the bull will last, what seems obvious is that stocks are edging closer to the end of this torrid run.

That in itself implies that it is not a time to overreach for returns, but it doesn’t say anything about whether it’s time to bail on the bull or keep holding on tight for the remainder of the ride.

Positives can be found in the form of a healthy U.S. economy, reflationary policies from overseas central banks, bullish quantitative models, and relative undervaluation in overseas markets.

Negatives can be seen in a fading U.S. monetary policy impulse, weaker global economies, overvalued U.S. equities, and technical conditions that are showing some cracks beneath the surface.

There is also the wild card of rapidly plunging oil prices, which we believe will ultimately be good for the world economy, but which also carries the risk of collateral damage for oil-sensitive companies and economies.

Also Read – Stock Market Crash – How You Gain From It.

One way to focus on how best to position in this environment is to identify the themes that may dominate the backdrop over the next year or two. For 2015 a number of things have risen to the surface that should help provide a roadmap of where to best capture returns.

The first theme that is playing out is the continued strength in the U.S. dollar. In a world where several other currencies are being devalued in an attempt to support struggling economies, the dollar enjoys a number of key attributes that should keep it buoyant. Some examples are healthier economic growth than other economies, the likelihood of interest rate hikes later this year, improving budget and trade deficits, low inflation, and a stable destination for foreign direct investment.

The biggest risk to this view is that the dollar may be overbought in the short-term, and a countertrend correction could unfold at any time. However, any dips that occur would likely make an attractive entry point as long as the current supports for the dollar remain intact.

How to Play a Strong Dollar

In a globally diversified portfolio, there are many ways to take advantage of a strong dollar environment.

Go overweight in US domestics stocks or Indian stocks that have a large percentage of business coming from the US. Focus on maximizing returns in dollar terms by reducing international exposure.

Commodities are likely to remain weak and historically carry a very negative correlation to the dollar. 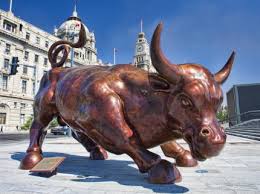 Be Careful of the Aging Bull Market

It is expected that the Federal Reserve will begin to increase short-term rates sometime around the middle of this year. But assuming that the US economy continues to expand, employment continues its upward trend, and no major external shocks occur, it is increasingly likely that the Fed will begin to normalize policy by hiking rates later this year.

At the same time that the Fed is beginning to tap the brakes, other major banks are jamming the pedal to the metal in an attempt to lift inflation expectations, asset prices, and growth rates.

Japan is clearly intent on ending its battle with deflation, and the Bank of Japan is buying an unprecedented amount of assets with the goal of achieving higher inflation expectations.

Elsewhere, the European Central Bank (ECB) has its eyes set on price stability. ECB just announced its own quantitative easing program that will involve the purchase of $1.3 trillion of European bonds over the next year and a half. Europe’s banking system is more complicated than that in Japan or the U.S., but the ECB has shown a clear commitment to jumpstarting the Eurozone economy.

Despite very low growth rates and continuing structural challenges, the ECB’s measures are likely to boost asset prices over a cyclical time frame just as they have in other markets with QE programs. So despite sour sentiment towards European assets at the moment, we think Europe also offers an opportunity, mainly due to central bank largesse.

Theme 3: Avoid Value Traps in India (and EMs in general)

India has enjoyed higher growth rates than developed markets for many years, making India a popular choice for investors. But more recently India has started to underperformed, creating the perception that it offers good value. The ground reality has not changed as quickly as expected by the market. Business conditions and loan uptake has been as weak as it was, say, six months back. Earnings haven’t grown as fast as expected. Add to that the unseasonal rain that lashed the country has had a very damaging impact on crops.

A decade ago a solid portfolio was built on the back of the BRICs (short for Brazil, Russia, India, and China). Today however half of that BRIC complex is in recession, with Russia in complete turmoil driven by sanctions, plummeting oil, and a collapsing currency. Brazil is facing an inflationary recession, while China is experiencing a slowdown due to a bumpy transition from an investment-led growth strategy to a more consumption oriented model.

India is no longer the slam dunk that  it was several years ago.

There are still plenty of opportunities for investors, despite an aging market cycle.

In my book, ‘Stock Picking Made Easy’, you will find a simple strategy to identify great companies at reasonable valuations in the Indian Stock Exchange. Identifying great companies at the right time is the key to long term wealth creation.